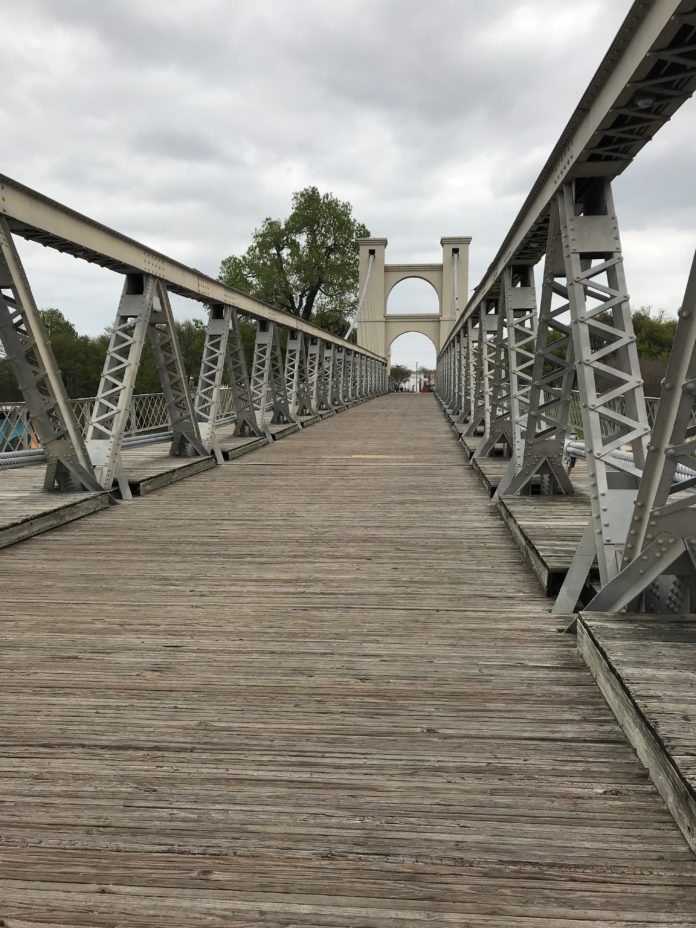 On Friday we drove to Waco. I finished Chip’s book along the way, it gets really lofty and inspirational at the end. It made me want to get up and do something extraordinary when I read it the first time. I also had lots of talks with God during that first reading. While reading it to Tim, I got those feelings all over again.

When we got to Waco we figured we were too early to check into the hotel so we decided to ride around and do a little “scoping out” for later. We also went to Baylor University to get Jon another souvenir from another college.

Not only was it big, but had items like I have never seen before, including a collage of words and images cut into a 20″ square of steel and finished in gold. We also found the Baylor bear’s habitat which is nicer than any zoo exhibit I’ve ever seen. It included indoor and outdoor areas and was right in the middle of campus.

Their sports area, which is rather new, was also top quality and included water areas that were really pretty.

We then headed back to the hotel, although it was still kind of early for check in. Fortunately our room was ready, so we carried our stuff up and rested for a few minutes before heading back out.

Quite by accident we found a place that one of our friends had mentioned to Tim, although we weren’t specifically looking for it. I am glad we did, because it was probably my favorite stop on the whole trip.

A really large building held four good sized restaurants on the bottom floor. The second floor, which covered the entire area of the four restaurants below, was Spice- a market that held every kind of art, craft and item you can imagine.

I found beautiful art that was printed on handmade paper that had seeds embedded in it. I bought handmade soaps, I bought some T-shirts with inspirational quotes, I took pictures of ideas for things I’d like to create and I think Tim could make. I walked around and around and around, trying to be conservative in what I actually bought, but wildly extravagant in what inspired me.

I told someone I could have stayed there all day, but I think I could live there, feeding off of the energy and creativity that surrounded me.

I think I wore Tim down because eventually he told me that he was going to sit downstairs on a bench and for me to carry on and take my time. I eventually headed to the centralized check out area where I had a fun conversation with the two ladies that waited on me. One was older and she was trying to console the younger one, who had just broken up with her boyfriend.

I told her we were there for our 34th anniversary and that there were good guys in this world, but she owed it to herself to hold out for the right good guy.

It is funny, but nowhere on this trip did I feel rushed. The salespeople had long conversations, asked about me and told me about themselves. Even in a crowded situation I felt that the people cared and wanted to not only know about me, but were willing to share parts of themselves.

We drove to see the suspension bridge that made Waco grow as a city over a hundred years ago. While there, we saw a bunch of girls setting up tables and lights. Tim decided to ask what was going on and they were from a sorority at Baylor setting up for a party. Tim wanted to come back later and crash the party, but I wasn’t sure how that would go over!

When it was time to think about dinner, we checked the menus of several different places online and after driving around awhile decided on a place that turned out to be one of the four restaurants on the ground floor under Spice!

It was a fun meal and I got another one of the craft beers that I enjoyed in Austin. This time the waiter told us we could buy it at a local grocery store, so we drove a bit out of town and after looking around and almost giving up, we found it! I have some in the fridge if you want to come by and have one!

We drove by Harp Design and if you are a fan of Fixer Upper you know what that is. If not, I will explain more tomorrow when we actually stop and go in to talk to the people there.

We then realized that Waco is kind of small town in that it closes up early, so we headed back to the hotel for an early night. I don’t think Tim was happy about that, he had a sorority party to crash!

The next day was what we actually drove all of this way for, so early to bed was a good idea.