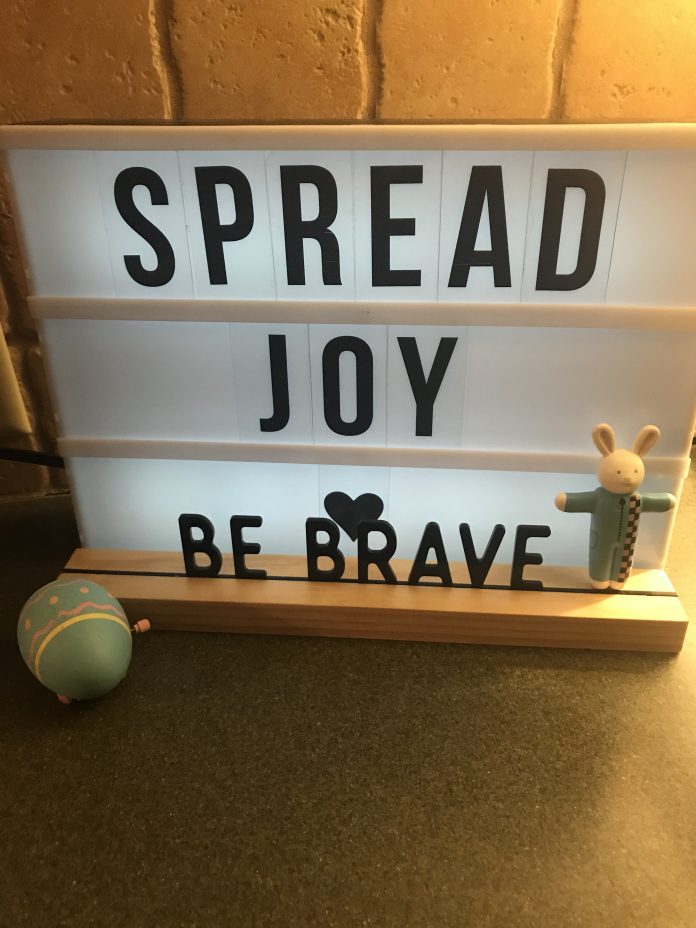 Yesterday I had a meeting at the food court in the mall. With our new theatre space being in the mall, I have probably eaten more Chick-Fil-A in 2020 than I have in all of my previous years combined!

I was shocked to find the food court packed, tables full of people and a long line to get a chicken sandwich. This mall is usually fairly empty, although it is doing its best to try to come back with innovative ideas like a dance studio and the theatre. But of all days, I thought this day would be quiet. The line moved quickly and I was soon at a table discussing new seasons and past productions as we planned and dreamed about the future of the theatre.

When we finished our lunch meeting and got up to head back to the theatre, a man sitting nearby waved at me and motioned me over. He said that he didn’t mean to pry and had no idea what we were talking about, but he couldn’t help but notice how engaged we were in our conversation, how much we had laughed, discussed and obviously listened to each other. He just wanted to say how nice it was to see people actually having a real conversation instead of just eating together while looking at their phones.

He then lamented that he and his wife used to have real conversations but didn’t feel like they did any more. He said it in a joking fashion, but it was kind of sad to hear. I jokingly said we were not married to each other, we just worked together and maybe that was why we were actually listening!

As we walked off, I said that little did he know we were actors so we were just ACTING like we were listening to each other. Again, I was joking!

It did get me to thinking about all that is going on right now. How much we already relied on social media and texting and emails to communicate. How this fear of a virus might push us even further apart.

Last week I had lunch with 3 friends and when we arrived, we hugged each other. After sitting next to each other eating and laughing, we got up to throw away our cups and head out. As we went to go our separate ways, one person said that we weren’t supposed to hug any more, maybe we should fist bump or something. I said that I really didn’t want to live in a world where I couldn’t hug my friends! (I didn’t point out we had already hugged AND passed tons of germs while talking, laughing and eating in such close proximity to each other!)

Thursday I went to see a play and ran into a friend in the lobby who introduced me to the person he was with. I shook hands with the new acquaintance and had a lovely chat. Soon another person walked up and was again introduced to everyone and he said, “I guess we aren’t supposed to shake hands anymore” and just kind of awkwardly nodded to everyone.

Most Sundays in church we stand and greet the people sitting around us. For someone like me who has the constant push and pull of being an introvert and yet enjoying people, this is always a trying time for me. I can put on the superficial face and shake everyone’s hand and yet it still difficult for me. I often see people around me who I genuinely like and enjoy having a brief conversation with, but it also throws me in a tiny panic. On the Sundays when this part of the service gets skipped, I always feel a quick sense of relief.

A couple of weeks ago during this part of the service we were all instructed to fist bump and everyone around me laughed and made jokes as we fist bumped our greeting to each other. This week church is online only and no one will stand and greet me or shake my hand or awkwardly fist bump with me. I will not have the small panic rise in me, but I also will not have the short conversations or the joy of seeing the people I look forward to seeing on Sunday morning.

I mistakenly went to the grocery store on Thursday, not realizing that the world had suddenly decided that everyone needed toilet paper and hand sanitizer right that very minute. I didn’t really need much, but I hate going to the grocery store.  As long as I was out and there already, I forged ahead. When the parking lot was full, I should have kept going but it just didn’t register what was happening until I walked in and saw only 5 shopping carts waiting to be used instead of the rows of them that are usually at the door.

Each aisle I went down was more and more empty until I got to paper products and the shelves were completely bare. (Except for napkins which was all I wanted.) I heard the butcher tell someone that the store would be out of fresh meat in less than an hour.

When I was ready to check out with my few items, the lines were long and everyone’s carts were overflowing. I felt kind of weird with my half empty cart and wondered if I should go back and get more stuff.

The lady in front of me was putting her items up on the conveyer belt and I was looking around as I waited when the woman behind me said, “Oh dear, I forgot my eggs.” I could tell it would be awhile before the lady in front of us would be done, so I told the older lady behind me that I would watch her cart if she wanted to go get them.

She thanked me and said she wasn’t even sure if they were even in her car. She then turned and walked out the front door of the store. I realized that she had said bags not eggs! When she finally came back with no bags, she told me that she was so upset that she couldn’t even find her car! I told her that the line had not moved a bit while she was gone and to just take a moment to catch her breath.

Eventually it was my turn and I chatted with the people checking me out and bagging my groceries. I happened to hear the lady behind me telling the person behind her that I had let her go out to get her bags and that she had been too frazzled to even find her car. She then said that I had the most interesting groceries in that line. She said that she wanted to go home with me.

I looked down and realized that I had napkins, flowers, cookies, a piece of carrot cake, soup, lettuce and wine. I had thrown in some lunch meat and a loaf of bread just because I felt odd not buying anything practical in the midst of a crisis. I laughed and told her that it did look like I was planning for a party not a pandemic.

When the guy sacking my groceries asked if he could take them out for me, I told him I wouldn’t even consider taking him away from all of the fun to be had there in the store and we laughed together before I left.

While putting my bags in the trunk I saw the lady from behind me looking for her car with the help of the guy bagging our groceries and before I drove away, they had found it. People helping each other, joking with each other, sharing thoughts with each other. Something that is hard to do 6 feet apart from each other.

I guess all of this is necessary. It is one of those things that if it does what it is supposed to do, we will not really know if we all saved each other by staying apart or if it just wasn’t ever as bad as we had feared. The other choice is to just go on and risk sickness and possible death if it is as bad as they say.

In the process the economy takes a hit, individuals who live paycheck to paycheck take a hit and charities like churches take a hit. If it keeps everyone safe then you have to think things will straighten themselves back out and we will all be better for it.

What I worry about is if we will get back to hugging each other without suspicion. If we will eventually shake hands in church with out worrying about germs. If we will again find ourselves laughing with the people in line with us at the grocery store without being afraid.

When I said that I didn’t want to live in world where I couldn’t hug my friends, I meant it. More and more we are fearful of people around us, we are lured into communicating through our devices and we don’t take time to really have conversations at the food court at the mall. I worry that this might make us all even more suspicious of each other. Not only are we scared of people who look different from us, who think differently than we do, but now everyone is a potential germ carrier waiting to infect us. Will we find our way back to each other after this?

While directing the last play I did, I got to listen to lots of backstage conversations. At one point I heard a comment that made me sad even though I don’t have any recollection of what the topic was. During the conversation I heard a young person say, “It doesn’t matter, the world probably won’t last long enough for us to grow old anyway.”  The other young people around her agreed and went on with the conversation. It cut through me to hear someone young say that.

What is the lesson we can take away from this new normal? What repercussions are we going to see from the way we are all handling this? Are our children and young people getting more and more hopeless? More and more withdrawn, more and more isolated, more and more fearful??

I am afraid of a world where we don’t communicate, don’t hug each other, don’t see each other, don’t get close to each other. We already hide behind our computer screens and our smart phones. I don’t want to see us retreat more and more.

As usual, I have no answers. I don’t think anyone does this time. We will just have to see. I hope that the term “social distancing” is something we will laugh about in the future. That we eventually find it an absurd concept. That we will find our way back together sooner rather than later. That in a couple of weeks I will be back in church shaking hands with people I hardly know and those I know well. I hope that I am having lunch with my friends and that we hug each other as we leave the restaurant. I hope that I can chat with people in line after buying a few groceries from well stocked shelves. And I hope that we can get back to disagreeing about politics and what team we cheer for rather than fearing each other.

Only time will tell.