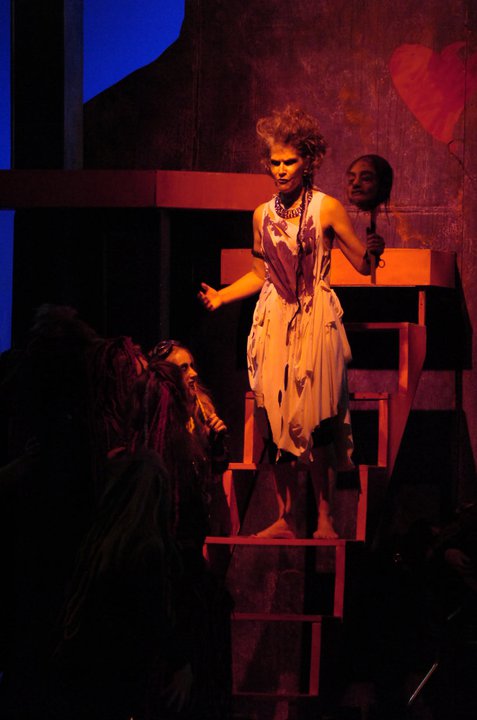 The rehearsal process is going well. It is always amazing to me when an actor can make me feel an emotion even though I have read the words a hundred times, we are rehearsing in an alternate space and it is just a couple of people, sitting in stackable chairs, still reading from the script. That is when I know that in spite of my inadequacies, it is going to be good!

One of a number of things that I find odd about myself is where I tend to look and who I usually watch during a rehearsal, a performance or even a press conference. When many people gather to watch something and most everyone is focused on the speaker, the star giving their best performance, I am looking somewhere else. I tend to watch the people on the fringes of the action.

I think I’ve kind of always done this, but I really started noticing it when I was a theatre critic for three years. I found myself watching the other actors onstage instead of the one giving the monologue, the one that should be the center of attention.

Now as a director I find myself watching the other actors on stage, the ones who are listening, or off to the side doing something other than the main action. I watch how they react to what is happening, I look to see if they are reacting in character, if they are engaged in what is going on.

I also find myself looking at the people standing in the background when the president gives a speech or goes on one of his rants. It is very telling to watch the faces of those in the background- the rolled eyes, the blank stares, the confused looks.

Whenever I find myself watching anything, I look at the people on the periphery instead of in the center. I even catch myself doing it at movies. It has to be a pretty compelling performance for me not to have my attention wander to those around the action.

I find sometimes that in watching the actors I am directing react to the scene around them, I learn more about their characters and what they are thinking. Sometimes, I realize they are seeing it differently than I am. Occasionally I have to ask why they have reacted a certain way to clear up any confusion, either on their part or mine, and other times I take it in and think about it for awhile.

When you are able to work with really good actors, they begin immediately reacting to the world you are creating as their characters. People with little experience think that if they aren’t talking, then no one is looking at them and they can just sit there and relax. They are wrong!

Some actors even stay in character and engaged backstage during the show, but sliding in and out of character is more the norm I see behind the scenes. I have respect for either way, as long as while you are on stage, you are in character and totally immersed in what is happening on stage.

Reacting as if you are hearing something for the first time is essential. Reacting as if you don’t know the end of the story is difficult. Letting it look fresh and natural when you have rehearsed for weeks is one of the true signs that an actor knows what they are doing.

One of my favorite scenes as an actor was when I was in college this last time. As I pleaded for forgiveness, a guard came up from behind me and grabbed me to carry me away. As I stepped forward, the actor playing the guard had to pick me up from behind, turn me around and slam me down.

Now I know that doesn’t sound difficult (or fun actually!) but I could not let on that I knew what was coming, I had to move forward as if that was my only goal, I had to be swept off of my feet as if by total surprise. It was a challenge each time to just walk, never showing any inkling that I knew the guard was there or about to grab me. I loved it!

Being spontaneous yet rehearsed, staying engaged even when you aren’t speaking, keeping things fresh and yet feeling comfortably secure in your role are all things that the audience notices if you don’t pull them off, even if the audience isn’t really sure what exactly isn’t “good” about what they are watching.

Like I said at the beginning of this series, there is so much more to acting that learning your lines and saying them. Getting to the point that you know your lines is where it all really starts. I am so fortunate to have a cast that knows what they are doing, gets how important all of these other elements are and works hard every rehearsal to make it all come together.

This play is a real ensemble, no one person has to carry the whole show. Each character is interesting and has their own part of the story to tell. When they are all put together, they know how to support each other, play off of each other and let each other shine. It is an emotional thing to watch.

I remember several years ago, sitting in the audience of a local community theatre as I wrote some notes at intermission for a review I would write later on. I couldn’t help but hear the woman behind me say to her companion that she ought to try acting, it looked so easy. I almost choked as the man she was with told her that he had done it once and it was pretty easy. He then went on to say that after that one time he hadn’t gotten cast again though, and had just taken up another hobby. (PS- if you can just “get another hobby” you weren’t really a theatre person anyway. We live, eat and breathe this stuff!)

As with most things, if you are doing them correctly they do look easy. When my son played football in high school and college, he was an offensive lineman. He often told me that his job was to not get noticed. If he was doing it correctly, then no one even knew he was there. If he messed up, THEN everyone saw him. His job, if done right, was to make it look easy, protect the quarterback and not draw attention to himself.

As actors, our job is to make it look natural, real and easy. You should believe we are who we say we are, you should see no evidence that we aren’t just as weird, creepy, silly, dumb, brilliant, violent, sweet or whatever trait we are portraying as we want you to believe we are. It should look easy. You shouldn’t notice “us” but see the person we are playing.

Even when we are sitting on the sofa, watching another character speak, it should seem real and natural. Even when we are on the fringes of the story, we should make you, as the audience, see us as someone else. It should look easy- it is really difficult.