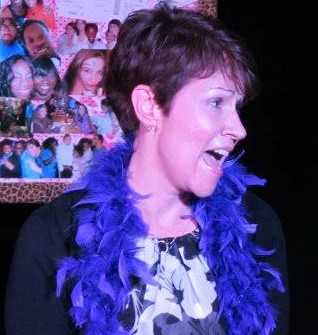 About a year ago I posed a question to a group of friends (all women about my age.) I wondered aloud when we would quit trying, when we would no longer care and quit dying our hair and trying to dress stylishly and wear make up, etc. When would we decide we are just old and it doesn’t matter any more? Just give up?

Everyone quickly said that it was a going to be a long time before they gave up! And I agreed.

Today I am in a different space and I realized that I asked the wrong question.

As humans we tend to be all or nothing types. It is either/or, black or white. We have a hard time finding the gray areas.

A few months ago I posed a different question, wondering aloud again (I need to stop that!) why older adults (i.e. our parents) couldn’t be realistic and just accept that they were aging and not fight us when we try to help them. I said that I hoped that I would be realistic when the time came. I hoped that I would not put my son through “fighting” me for the car keys when I was no longer capable of driving, or make his life difficult when he has to come over routinely to get me out from under the furniture I keep trying to move, yet can’t really handle anymore.

The person I posed this question to said that they thought fighting aging, kidding yourself into thinking you are still young kept those older adults feeling young. They thought it was probably better for them in the long run. I wasn’t so sure about that, but at the time I didn’t want to argue.

I know a geriatric doctor who not only treats a member of our family but also played my husband on TV. He is one of the smartest people I know and he is a much better writer than me. The other day he wrote something on Facebook that really triggered my memory about the conversation I had been a part of just a few months ago. He wrote, “The person who recognizes life is change and accepts and embraces it and keeps themselves in balance with their individual aging process usually does well and rarely becomes seriously depressed. The person who tries to live in a fossilized reality created by their younger self often does become depressed by seeing the growing mismatch between who they are and who they want to be and having a life that no longer really supports who they are. Studies of those who have broken the century mark show that they all have only one thing in common, a sense of optimism and looking forward rather than a sense of regret and dwelling in the past.”

During the past few weeks I, like all of America, have not been able to get my hair done. I keep it really short and dark. This happens during long sessions with my friend/ hairdresser every 4-5 weeks.

I wrote about how much I love going to get my hair done only two days before my friend decided to shut down her business for the pandemic. I had an appointment that first day she was closed. Here we are 9 weeks later.

During that time I waited to lose my mind, to have my hair in my face and those gray roots showing. I did a good job at first of fluffing my hair to hide the roots and then avoiding mirrors all together. After all, no one else was seeing me, so why did I really need to look at myself??

But somewhere along the way my mindset changed. I realized this was an opportunity to do something different. After all, having gray hair doesn’t make me any older than I already am. It might make me look older, but I won’t know that until I cut off the dark parts and see what is left.

Bottom line, I am not 29. I have done that age, it was ok, and now I am doing 63 and it’s pretty good! Do I really need to have the same hair color I did 34 years ago? And if I admit to you and to myself that I am 63, have gray hair and am old, is that such a sin? It doesn’t change that I am super healthy, pretty damned strong (both physically and mentally) and try to stay current with news, sports, politics and culture. It just says that I am comfortable with who I am and where I am in life.

I have experienced so much- growing up in the zoo, traveling all over the country, finding an excellent life partner, raising a child, teaching lots of other kids, going back to college at 53, following my passions, and living a full and interesting life. Why should I pretend to be “young” when I have accomplished so much!

Some people act like admitting you are old is the same as confessing to a crime. It is as if being your actual age is a terrible thing. Would being a stylish woman of a certain age with gray hair really be so bad?

When the governor said that hair salons could reopen last week, I was thrilled for my friend to be able to return to the work she enjoys and that sustains her. I made appointments for my son and husband to get their hair cut right away and saved my spot for a couple of weeks down the road. After all, if I am going to let it grow out, a couple of more weeks can only help the situation.

I am excited to try a different look. After I see it, I might book another appointment to get it dyed ASAP! My hope is to grow to love the real me, to enjoy the extra time I don’t spend getting my hair colored by maybe having a beer with my friend/ hairdresser. And maybe spend the money I save on something more important.

I am hoping that I can see the world differently, not as someone fighting tooth and nail to appear young, but as someone who is comfortable being who they are, an experienced, mature person who can still do a lot in this world.

Will it take some getting used to gray hair? Probably. The few friends I have who have transitioned to gray hair had blond hair so it was not a huge shift. In fact, I didn’t even notice they were doing it until they pointed it out! Going from very dark to gray will be rather drastic, so it will be odd at first I am sure. Will I freak out and have it dyed back brown by the time you actually see me again? Maybe. After all, I am entitled to change my mind!

What I hope for is that I realize that I am an amazing woman whether gray haired or brown, whether I am old or young. I would hope that the people who love me, love me whatever hair color I have. And for those who don’t like it, why should that matter to me?

I want to be that amazing old woman who doesn’t deny her age but revels in it. Who doesn’t spend time worrying about keeping up the appearance of a past life because she is too busy living in the present. Who knows that change is not the enemy but the only way to keep on growing. Who sees beauty in everything around her and finds a way to see it in herself.

I still say that I hope I can be realistic as my eyesight gets a little worse or my hearing goes, as I lose some strength or forget things more often. I hope to emulate my late mother in law who took matters into her own hands as she aged, taking decisive measures to ensure that she lived her older years the way she wanted and was taken care of the way she wanted when she was no longer able. She was realistic and thoughtful and I have so much admiration for her in the way she handled her last years.

I hope that I have 40 more years ahead of me. I hope that I am one of those rare people who lives to be 100 and is still giving the people around me a run for their money! I hope being real and thoughtful will help make that happen. By then I might have turquoise or pink hair, who knows! But for now, I think I will let my hair be what it is and let my life unfold authentically.

I asked my friends the wrong question. It isn’t a matter of giving up when you quit coloring your hair. Just because you let it go gray doesn’t mean you give up on everything. I plan to try new makeup colors to go with the new hair color. I plan to keep trying to dress stylishly, yet appropriate. I plan to still keep my hair short and probably cut it more often since I don’t have to wait for the roots to get long enough to color. I am not giving up, I am moving on.

It isn’t all or nothing. I am not throwing in the towel like I thought would be the case when I made this change. I am opening myself up to a new phase, a new look, a new mindset. I am not a youngster any more and that is fine by me. I don’t want to go through all of that again, it was exhausting! Life isn’t all black and white, I don’t have to choose whether to keep pretending to be something I’m not or just quit trying altogether. I have raised the family, built the portfolio, discovered some of the mysteries and now I can sit back, enjoy the fruits of my labors and live life to the fullest in the gray area.