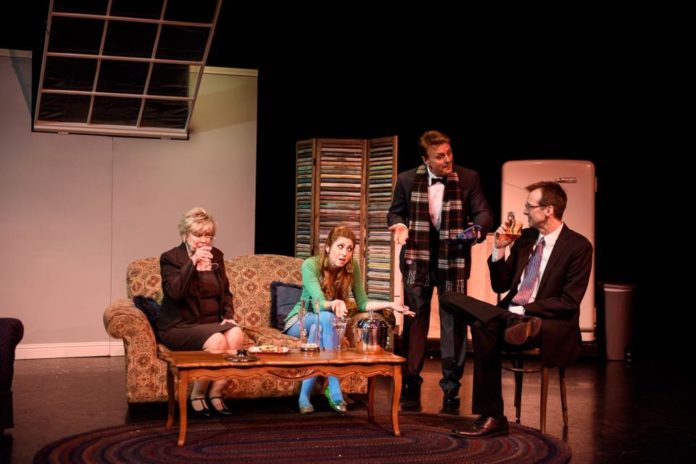 The past two nights we have worked on my least favorite part of the process- blocking.

For those of you who are not theatre people, blocking is when you show the actors where you want them positioned on the stage during the show. Where they get placed when you first block is rarely where they ultimately end up in the show, but it gives you a framework of where to walk, where to sit and how to move between the two.

I hate the days we do blocking, so I try to just blast through it quickly. We did the whole show in two nights and I am ready to move on!

As a director I have read the script going on 20 times already. Each time I read it, I am looking for something different. I start out just reading the story. I imagine who could play each part. (FYI- Everyone I imagined in the main roles agreed and is in this show!) Then I go to practical matters while reading- each time with a different emphasis. What props do we need? Who is in each scene? How quick will the transitions be? How quick will people have to change costumes? What can I add? On and on, each time a question comes up about the set or the lights or anything, I reread the whole script through that lens.

I read it several times to put down my blocking ideas. I imagine the show in my head and think where I see each person going. I scribble it in the margin and then on the night of blocking usually can’t read my notes!

I did my blocking notes a couple of weeks ago but when we got in the actual space, it never looks exactly like you imagined. The space is smaller, the walk is longer, everyone looks too bunched up- you name it, whatever I imagined doesn’t work!

After the first night of blocking, after we had worked all evening in the space, I came home and reread Act Two and changed some of my ideas. When I got to the theatre last night, I found that my notes were so tiny I am not sure how the pencil was able to write that small and I had zero idea what the notes said!

It is truly embarrassing to stand in front of your cast, people you are supposed to lead through this process, squinting at your notes, unsure of what the hell you want them to do. It is also upsetting when your idea looks terrible from the audience.

What seems natural in the movie going on in your mind, is way different with real people on stage. In trying to make pretty “stage pictures” with interesting levels and adequate movement, people have to be moved around in ways that you might not move in real life. In real life, a person might sit on the couch and have a complete conversation- I do with my friends all of the time. For an audience to just watch two people sit on the couch and talk is boring. It is actually boring for the actors as well!!!

Standing up for no apparent reason is not right either. So you have to look for a line that is motivation to stand up, or if standing, to sit down. You need a reason to go to the other side of the room, or look out the window, or walk away. It can’t just be random.

There are directors that want to move the actors like puppets or chess pieces. (The origin of the term blocking comes from a time when directors actually used wooden blocks in place of the actors on a miniature model of the set to figure out this movement.) This type of director will tell you every move to make and want you to stick to it no matter what. As an actor you feel somewhat stifled in that instance. Then there are directors that want it all to be organic and don’t tell you much of anything. As an actor, that makes you feel like you are just flailing in the wind with no place to go.

I try to be a little of both. I try to tell the actors places to be at certain times and then let you as an actor move some when it feels natural. If it doesn’t look the way you think it does, then I’ll tell you and we will figure it out together.

The luxury of having actors who know what they are doing and take their jobs seriously, is that they will respectfully throw out a suggestion and we can try whatever they want. After all, that is what rehearsal is for, to try different things until we get it right. If an actor can tell me when something doesn’t feel right, or when I can see that what is happening on stage doesn’t look right and we can honestly talk to each other, we can work out anything to the benefit of the show and everyone participating and watching.

As the process goes on, we tweak, change, and modify as we go. The goal is to refine the way the actors move so that it all becomes second nature, smooth and natural to see. We make the changes behind the scenes as fluid as the ones onstage. We go through it over and over until it is second nature to hug someone in the right spot or walk away gracefully.

But it all has to start somewhere, and where it starts is not so graceful, not so refined. It all makes me, as the director, feel terribly inadequate as things don’t look as I had imagined, don’t work at all, or just leave me trying to read tiny notes to myself while everyone waits. And watches. And wonders what they have gotten themselves into.

And the more I try to keep control, the more I sweat it out and can’t focus on the miniscule hieroglyphics on the page in front of me.

Bottom line, it is done. Everyone has somewhere to stand or sit or move to for the entire script, and now we can move on to the more creative, the more enjoyable parts of the process. Thank goodness!